HyperTTS 0.65 is now available, and shows the estimated time remaining when generating batch audio. Azure has released some new regional Mandarin Chinese voices. These voices are also available in AwesomeTTS 1.68. 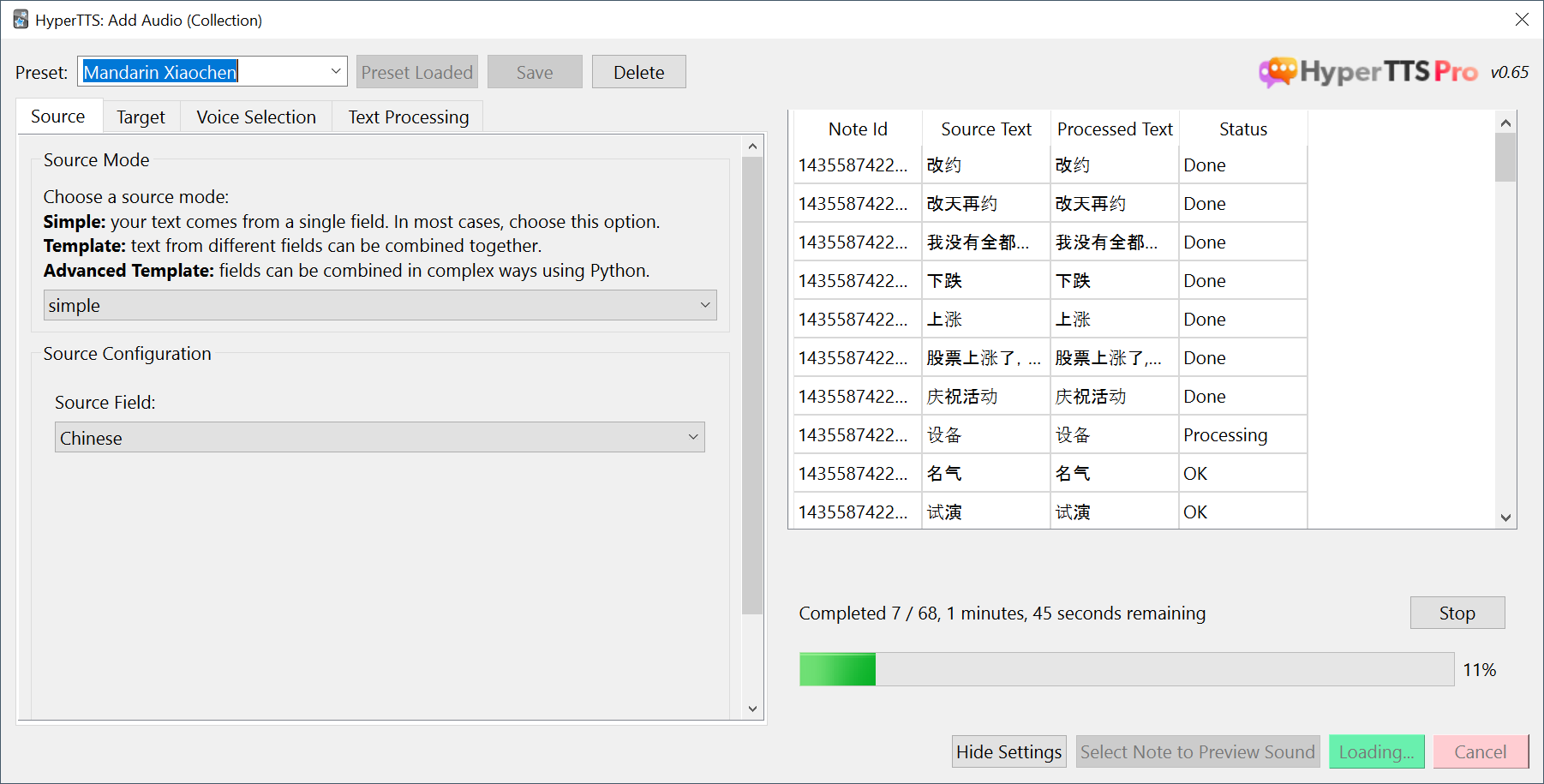 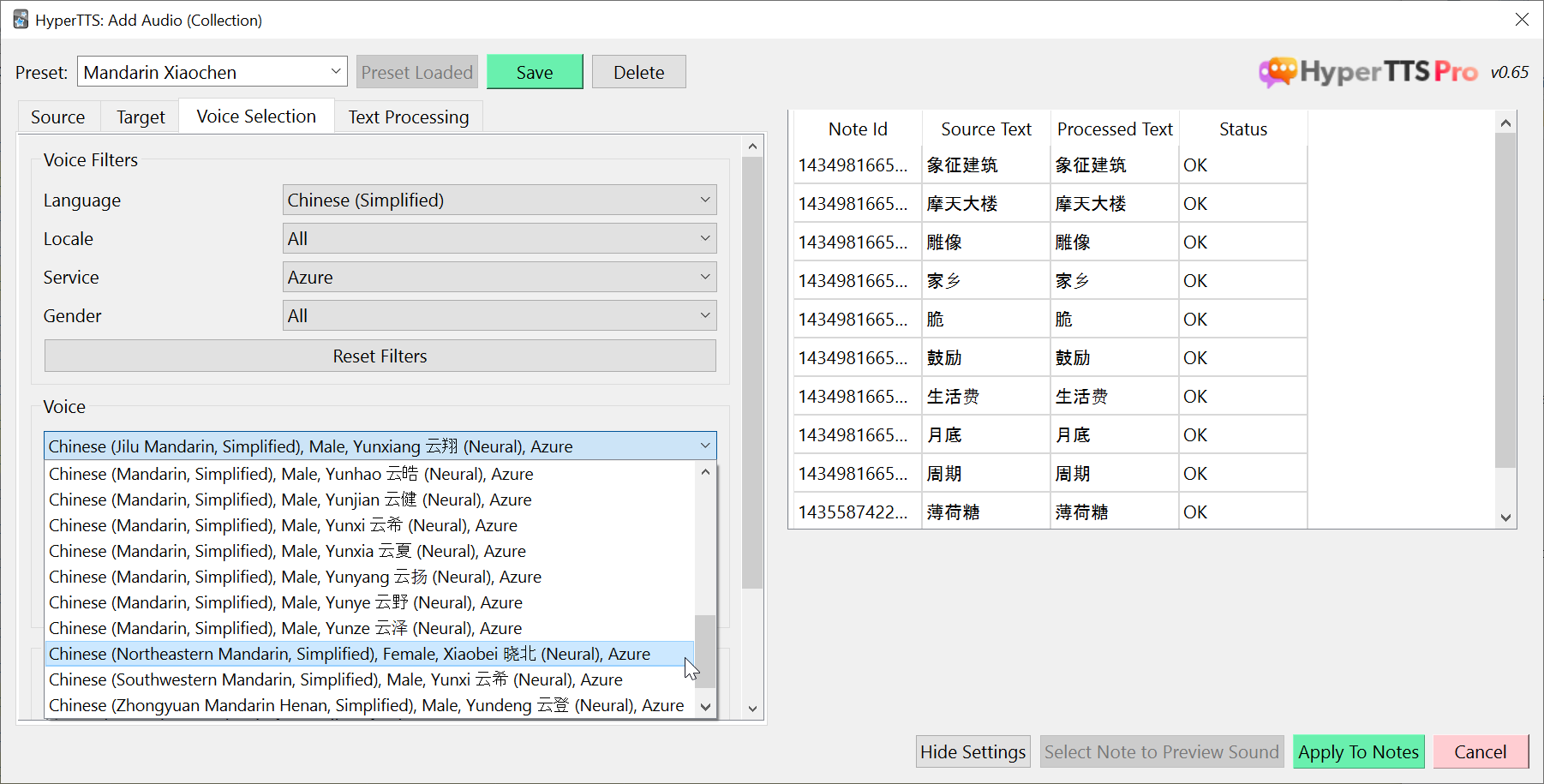 More details on the Azure Blog 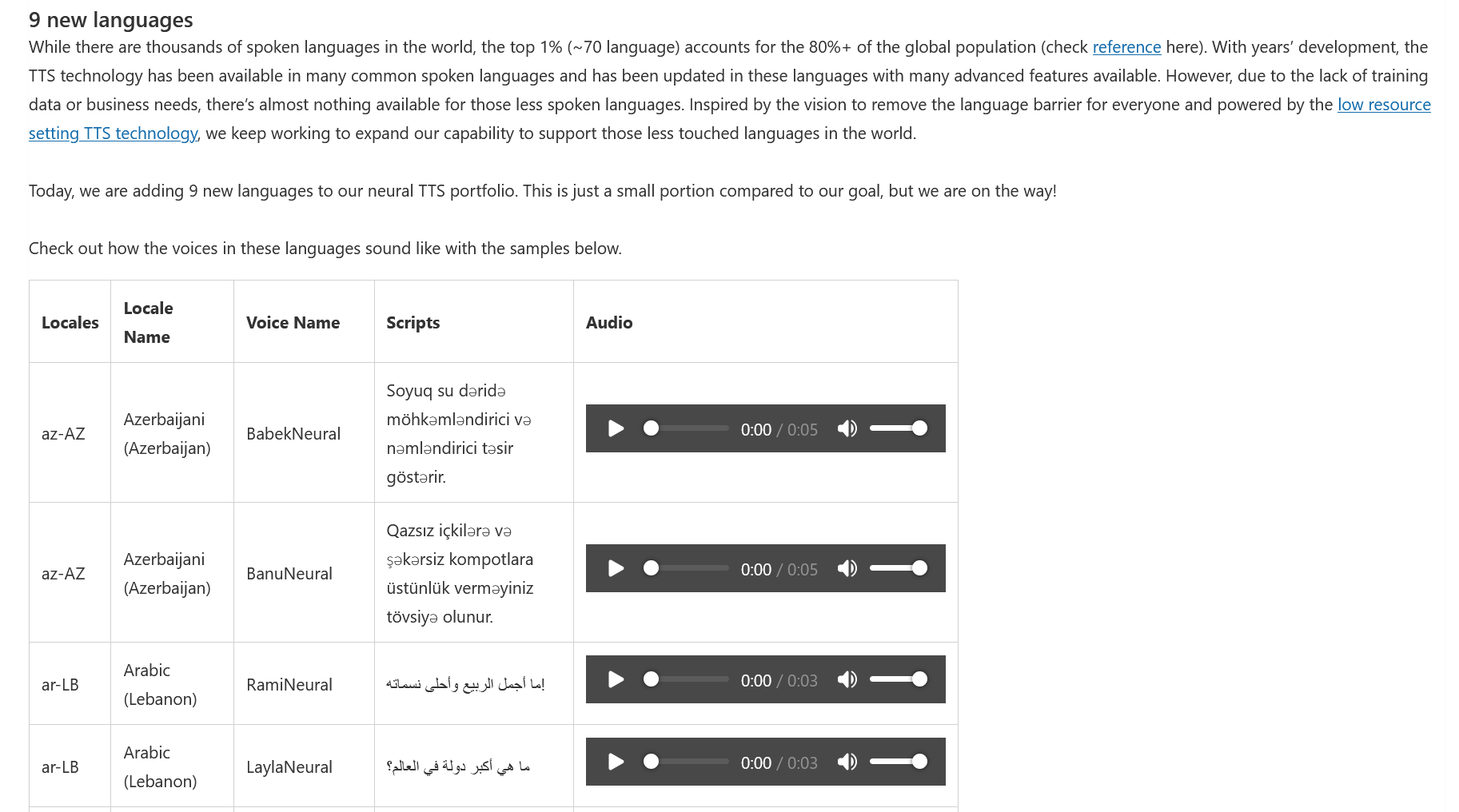 HyperTTS 0.60: Support for Ogg/Opus and Ogg/Vorbis for Google, Amazon, Azure. Provides higher quality audio and smaller file sizes, but not supported on iOS AnkiMobile. Should be supported on other platforms, including AnkiDroid.
Added a menu item to remove TTS tags from a card. 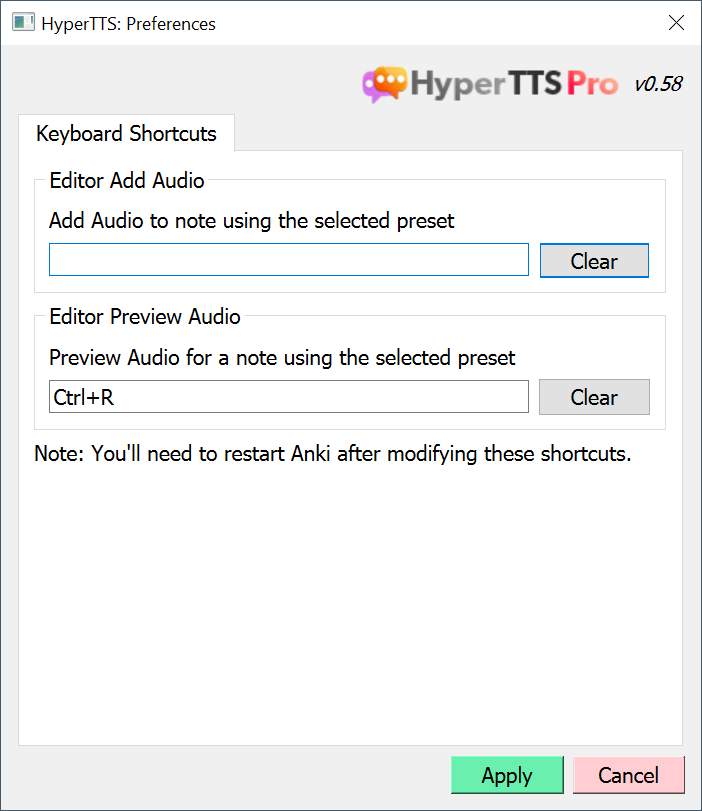 Language Tools now supports Anki 2.1.50: the functionality is the same as previously with some slight changes. The Language Tools toolbar on the editor is collapsed by default, and you need to click the Language Tools button to expand it. Also, the per-field actions such as Choose Translation, Breakdown, Speak are now right-click menu actions (previously they were buttons). Anki 2.1.50 is still very new and many addons may not be compatible (though AwesomeTTS, HyperTTS and Language Tools should work), so if you need absolute stability from your Anki setup, you may want to hold off a little bit.

HyperTTS v0.40: has been released, there is now a Preview Audio button to allow you to listen to the expected audio file before adding it to your note from the editor, and fixes a bug with Forvo in priority mode. A number of people want to look for sounds in Forvo first, and then on other services if Forvo doesn't have the word, and that feature now works correctly.
Note: if you don't see the HyperTTS bar as in the screenshot below, you may need to disable Language Tools (i'm trying to fix this conflict).

AwesomeTTS 1.57: has been released, it includes the CereProc service which adds a number of English voices and other European voices. AwesomeTTS Plus subscribers of course have access to this new paid service. 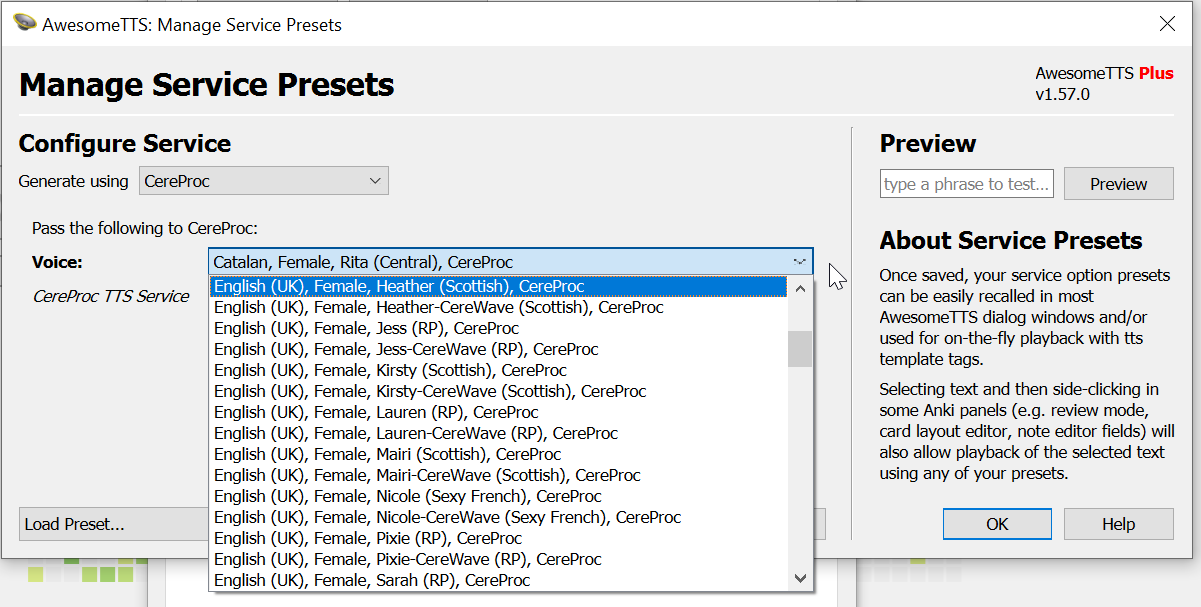 Also, a new option was added Escape HTML Special characters such as <,>,&. I realized that those of you studying technical subjects such as medicine often have sentences like "patients age < 30". This < sign needs to be converted in order for TTS engines like Azure to properly read the sentence as "patients age less than 30". 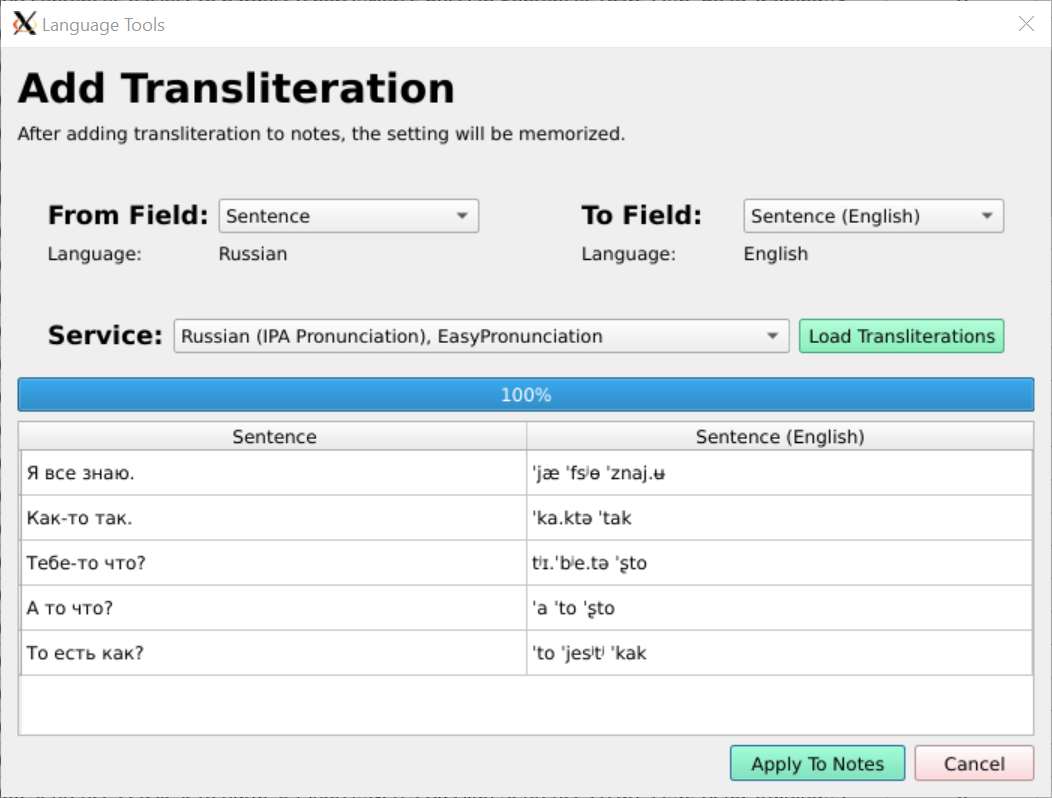 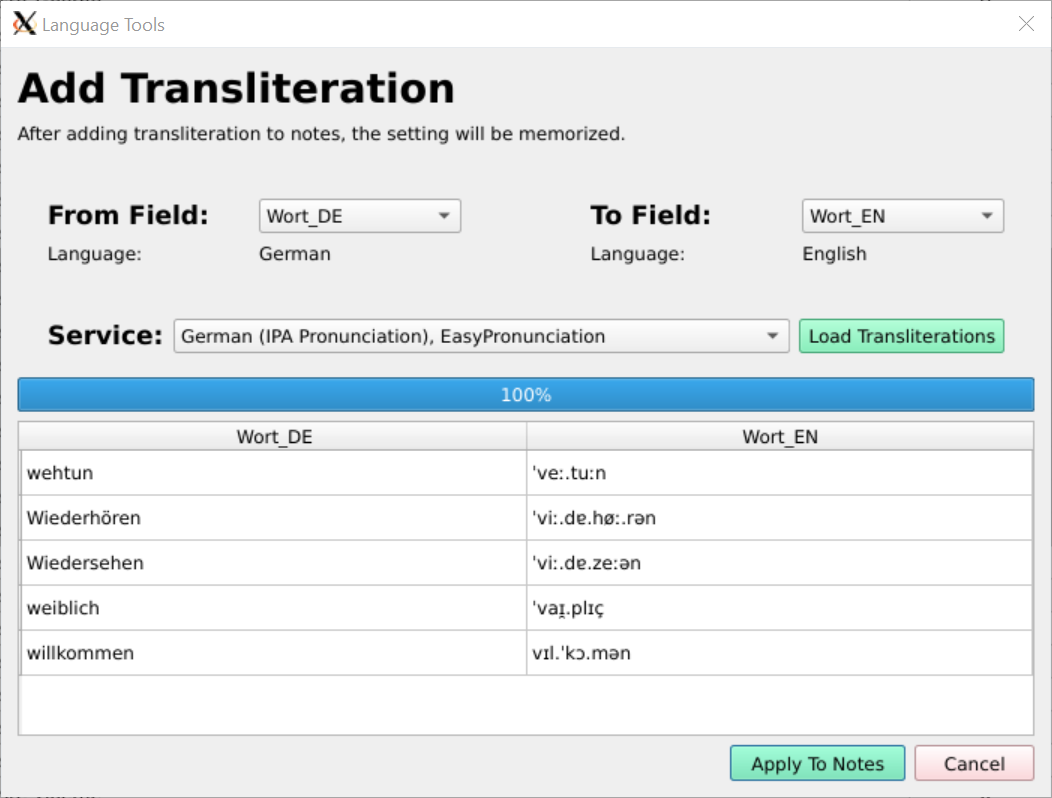 AwesomeTTS 1.48: important: the mp3 cache directory has been moved from %APPDATA%\Anki2\addons21\1436550454\awesometts\.cache to %APPDATA%\Anki2\addons21\1436550454\user_files\cache . If you want to preserve your cached files before upgrading, please back them up from the previous location, and after installing 1.48, you can copy the cached mp3 files to the new location. This new location will not be overwritten when upgrading the addon going forward. Other fixes: fixed Naver Papago, Forvo now looks at top 10 results to pick the most accurate one (contributed by TiddlyWiddly).

Language Tools 3.13: new Breakdown functionality: take a sentence of foreign language, and break it down to its individual components, with translation and transliteration of each part. This will be particularly useful to learners of asian languages or unfamiliar scripts. It could be useful when learning languages which use latin alphabet, to understand the sentence structure. The feature set is very basic for now, and you'll have to copy the result set into the field of your choosing. Breakdown is available in Chinese, Japanese, Thai, French, German, Spanish, Russian, Polish, Italian. If you're interested in another language please contact me. 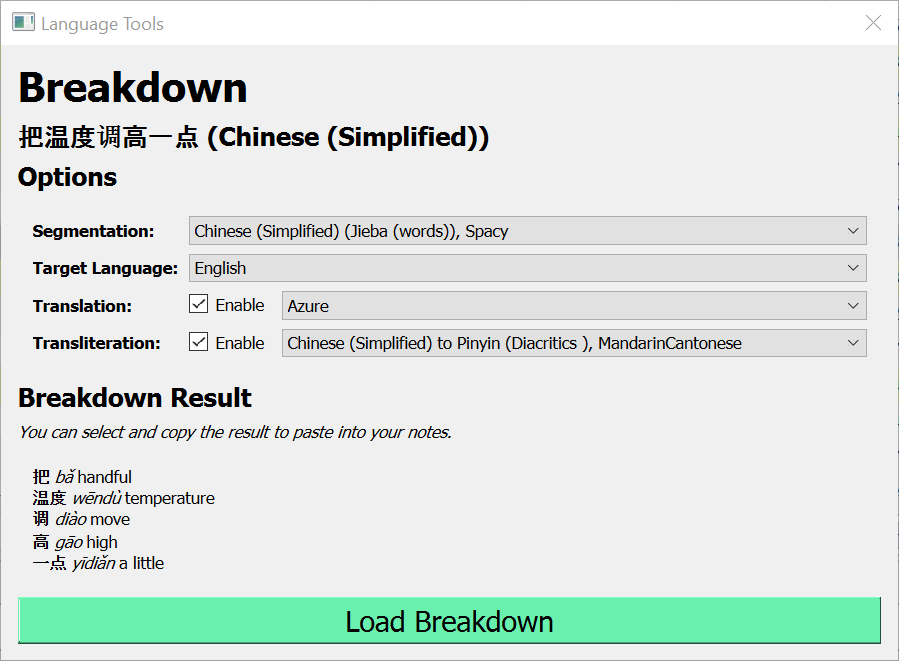 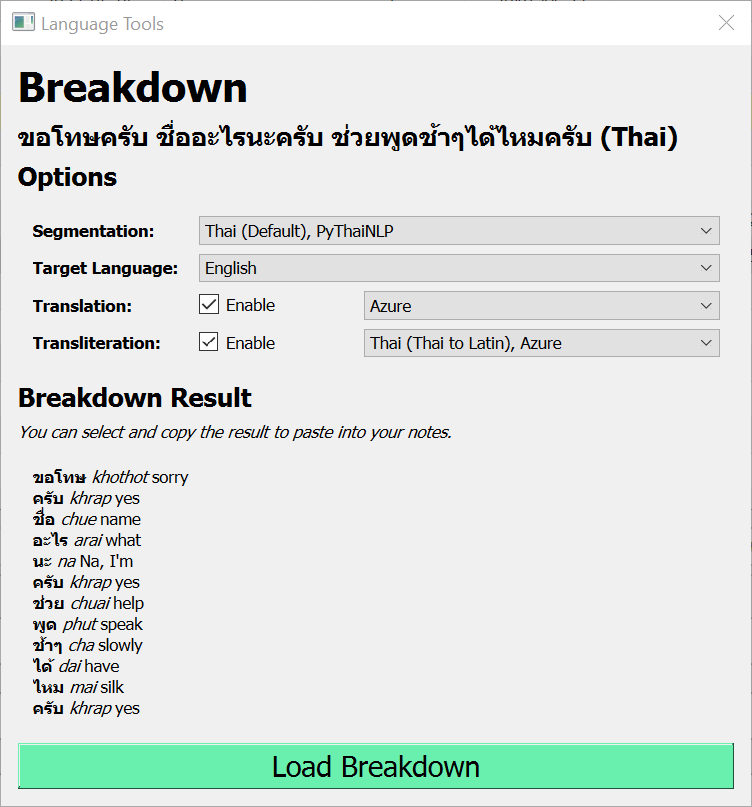 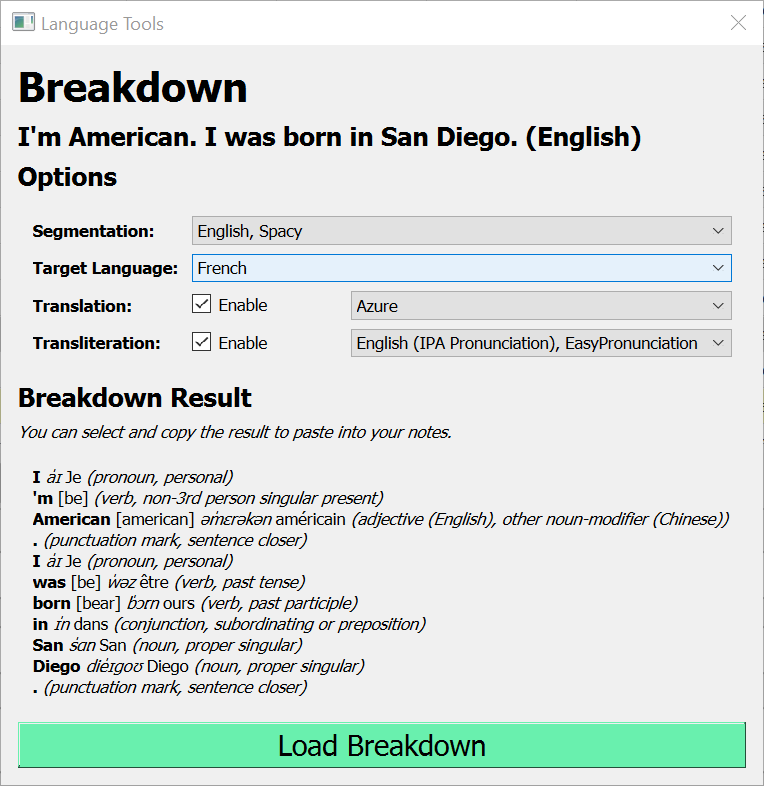 Language Tools 3.5 released: Text replacements can now be done in simple mode and regex mode (regular expression). For most users, simple mode will be easier, and if you have special needs and understand the regex syntax, you always have that option. 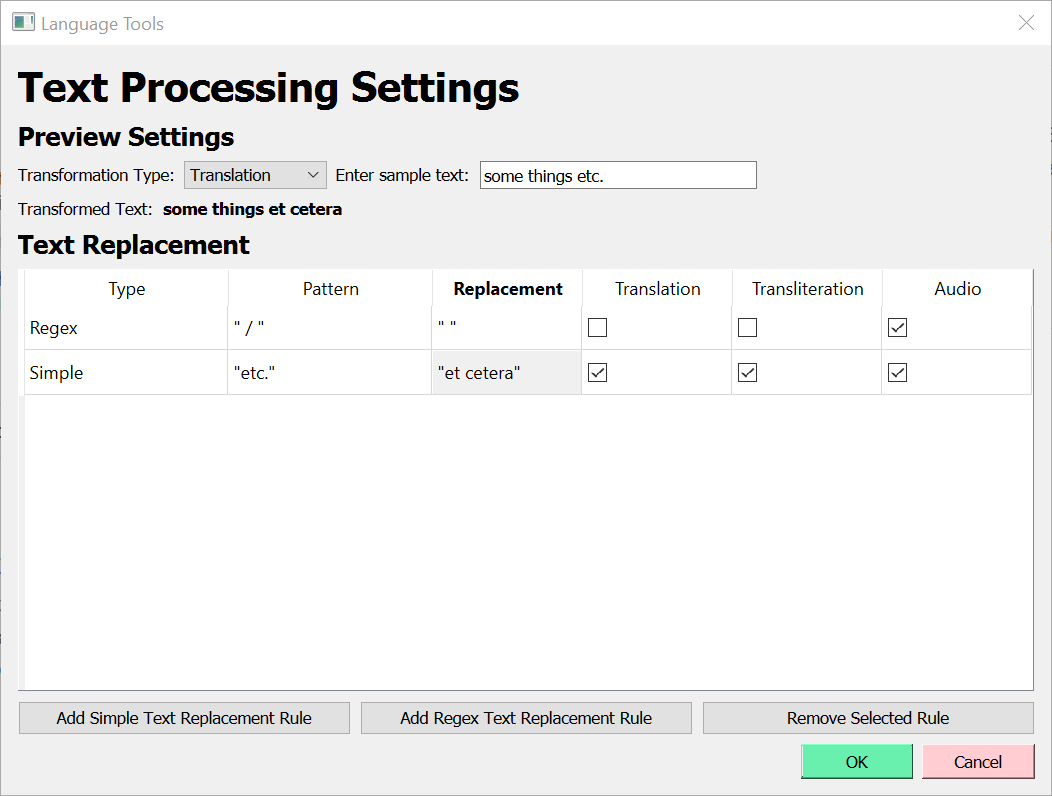 Language Tools 3.3 released: You can now define text replacement rules, using regular expression syntax. This is available in menu Tools -> Language Tools: Text Processing. Replacement rules can apply to all transformation types (Audio, Translation, Transliteration), or the ones you choose only. You can verify that your replacement rules are working by entering some text in that dialog. 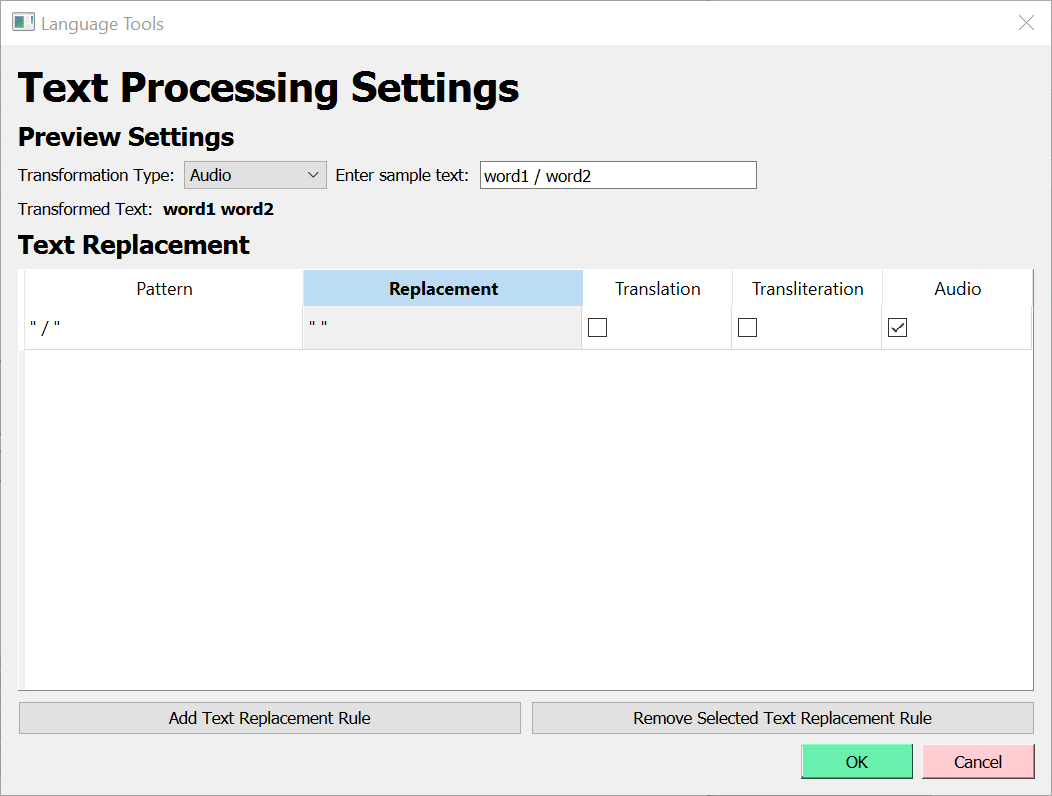 AwesomeTTS 1.45 released: Azure now has SSML support, you can use tags like <break time="1s"/>. Added links to various tutorials to help beginners learn how to use AwesomeTTS. 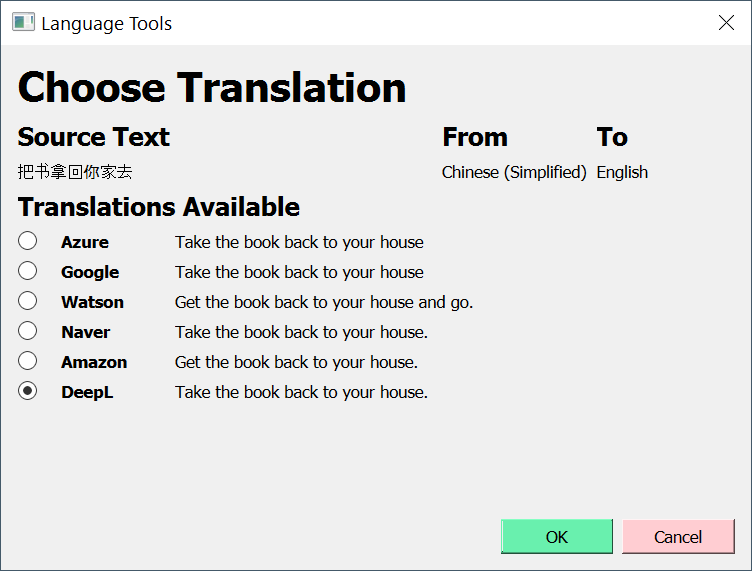 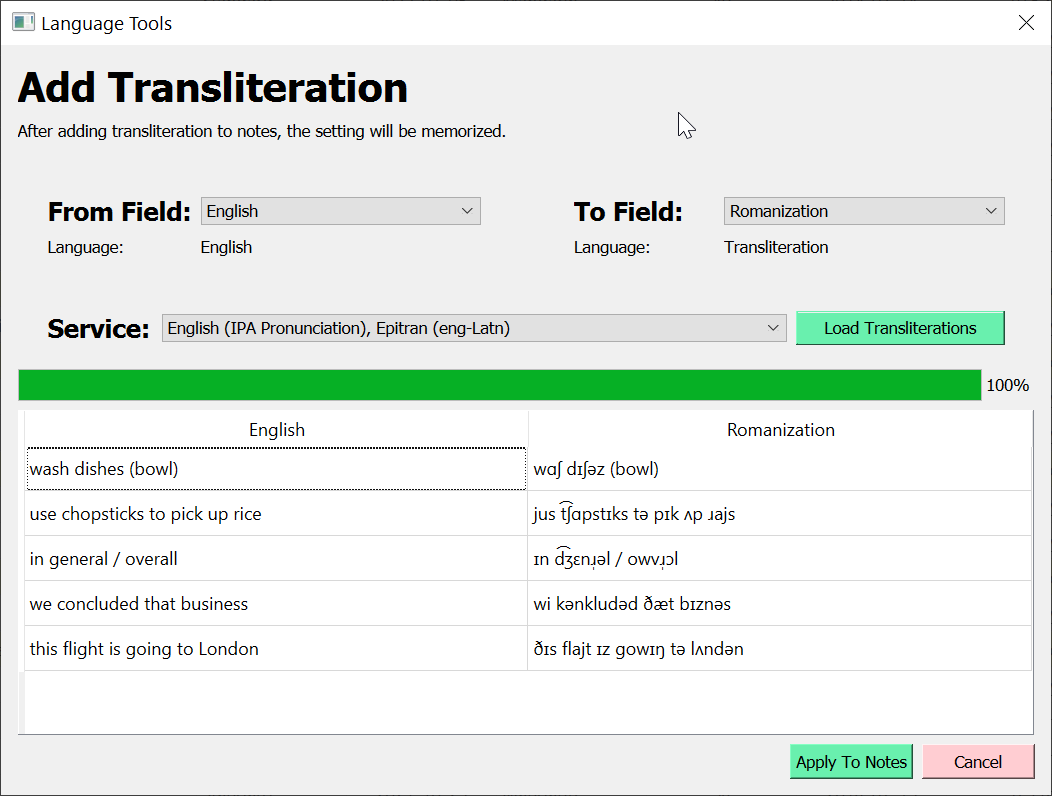 Language Tools 3.1 released. Previously, when a single error was found while applying translations or transliterations, you had to start over (even if you selected 100 notes). This is now fixed in version 3.1. This should help with problematic services such as EasyPronunciation which has an extremely restrictive daily limit (I'm working on fixing that). Also, wanted to remind of the following:

Thanks for using Language Tools, let me know what features you'd like to have !